The goal of each level is to destroy the vortices. Although some vortices will take several stage to destroy. Upon reaching a level where the vortex can be totally destroyed, it will unleash the most dangerous of its swarms to make things a lot harder for our players. The twist we’ve added in this game is that the vortex on each level will keep growing, throwing ever increasing waves of enemies to overwhelm the player, so that they must continually fight to push the vortex back. The game has been especially designed to play with up to 3 friends, although we’re considering adding an optional fourth player based on player feedback. 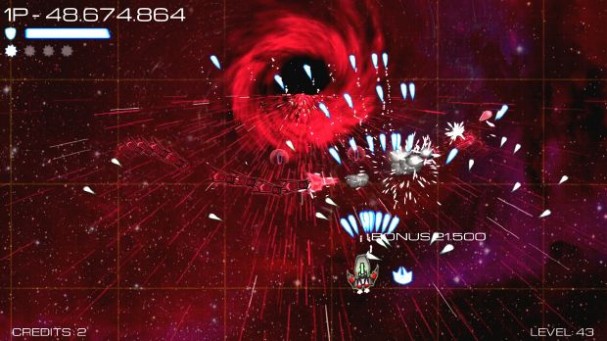 To implode the vortices, the player must destroy enemies to collect their energy. On top of the vortex there are two spheres: The player level (blue sphere) and the vortex level (red sphere or black hole). When the energy item sent by the player reaches the vortex, the blue sphere shrinks the black hole, symbolized with the red sphere. But in the other hand the black hole is constantly growing stretching the blue sphere. The game ends when the blue sphere makes the red one disappear or the red one grows to its maximum size. The concept is kind of new, reuses the concept based in Beekyr and improves it by removing the unnecessary bits.